What Is French Linen Fabric?

Known for its strength and fresh, timeless look, French linen is a favorite among designers and manufacturers of home textiles.

But there’s much more to French linen than where it is grown. This finest linen is highly sought after, not only because of its high-end feel but also because of its natural features that make it easy to care for and the environmentally-friendly practices French farmers use to grow flax.

How French Linen Is Made

The growth and cultivation of the flax used to create French linen has a long history in Europe’s coastal communities. Grown on farms that border the English Channel and southern portion of the North Sea, flax thrives in cooler, wet climates.

French flax sowing takes place between mid-March and mid-April. Flax is grown according to a crop rotation method, with the rotation renewed every 6 to 7 years. This regenerates the soil for other succeeding crops, like beet, wheat, potatoes and others.

What many may not realize is that French farmers have been perfecting this sowing process for many generations. In fact, as one of the oldest textiles, linen itself dates back nearly 5,000 years.

Here is how linen is made:

After sowing is completed, it takes approximately 100 days until the flax plant is ready for harvest.

Retting occurs, which is the act of placing the flax in water before being taken out to dry. This allows the fibers of the plant to be more easily separated, with the leaves, seeds and fibers located inside the dried stems of the flax plant removed.

Scutching further loosens the flax fibers. This process involves metal rollers crushing the woody part of the stalk. Fibers are removed, and other parts of the plant are set aside for other purposes, such as making paper.

Natural fibers are then heckled. This process separates the short fibers using a combing technique, leaving behind the long flax fibers.

Fibers are then spun into yarn before being woven into a textile product. 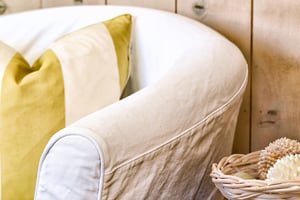 French linen is popular for various home uses, from window treatments to table decor, slip covers and table linens. It has also long been used to construct apparel, bed sheets and bed linens, homeware like towels, and other products because of its durability and incredible level of softness.

Certain types of linen are also more likely to be associated with certain types of products. For example, damask linen is more delicate and often resembles embroidery. This type of design is used for drapery and upholstery, as well as other home textile pieces like linen napkins and tablecloths.

Sheeting linen has an untextured appearance, so it is more likely to be used for French linen sheets, drapery, tablecloths and quilt backs. Plain-woven linen is often used to make kitchen linens like towels.

What makes French linen a popular choice for home decor and products? Its durability, softness with age and the fact that this fabric doesn’t require much extra care.

Through centuries of craftsmanship, French linen remains a prized fabric among designers and their customers.

Because linen comes from the cellulose-based fibers of the flax plant that are hypoallergenic, this fabric can absorb dampness up to 20% without ever feeling wet. That means you can avoid hidden dampness that often leads to bacterial growth. Flax is also considered a natural fiber and is more friendly to a person’s skin. This is especially beneficial to customers who suffer from allergies.

French linen keeps you cool in the summer and warm in the winter. And, unlike many other fabrics, linen actually gets softer and improves with age, even after cleaning it multiple times. That means no matter what time of year, linen upholstery will provide comfort.

One of the best features of French linen is that it does not require extra care. This makes it an ideal textile for products like upholstery and window treatments, even in high traffic areas of the home or office. This quality also makes this type of fabric an optimal selling point.

What is the best way to wash linen? Linen can be cleaned and dried in an individual’s washing machine and dryer. There are a few tips to keep in mind, however, to ensure the fabric’s fibers are not damaged:

The growing and harvesting process of flax has been perfected over generations. This has allowed French farmers to employ the use of sustainable farming practices.

Very little water is required to grow flax, so farmers along the coastal communities of France do not need to irrigate or fertilize during this process. Flax also typically requires little to no pesticides, herbicides or fungicides.

Very little is wasted of the flax plant, even after it is harvested. Other parts of the plant can be used to produce oil or flax seeds for consumption. And, because linen is durable, it enjoys a longer lifespan. Even when it is disposed of, linen is biodegradable.

Where To Find French Linen 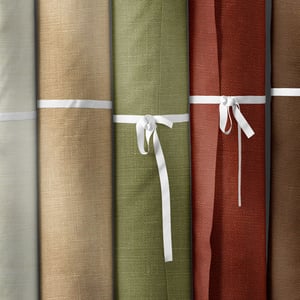 If you’re convinced French linen is the right choice for your project, your next question is likely, “Where do I find French linen?”

Working with a linen supplier offers several advantages. Linen suppliers often have greater access to a wide variety of fabric choices and can meet any quantity requirements you have.

A linen supplier can also offer custom features, such as custom dyeing and print services, as well as special finishes.

Because you won’t have to go through a distributor to receive your fabric, you’ll be able to take advantage of competitive prices as well.

However, to ensure you don’t run into any potential order issues, it’s always better to work with a domestic supplier in the United States rather than one located overseas. That’s because working with a linen supplier that operates overseas can cause several problems for you when placing and waiting for your order, such as:

You’re less likely to be able to make routine visits onsite with a foreign supplier to verify manufacturing practices as well.

Our article, What To Look For In A Linen Supplier, further explores other features to look for in a supplier, from minimum order requirements to turnaround time. In the end, it’s always better to be thorough in your search for a supplier so that you can ensure your project is completed in a timely manner and to the quality you expect.